This is not another blog about Pink Floyd or a postcard from the seaside. ‘Wish you were here’ refers to an organisation that has taken the co-regulation journey, placed it at the heart of everything they do and stepped up to the QAS challenge – to externally validate their progress.

Quality Assured Scrutiny is the unique accreditation award for social landlords’ co-regulation structures and it is provided in partnership by TPAS, CIH and HouseMark.

In April 2014 AmicusHorizon signed up to undertake the accreditation for QAS. I was pleased to be appointed as the assessor because five years earlier I had undertaken some of the original training for the engaged residents at AmicusHorizon. In addition, over the years I have kept abreast of the scrutiny structures (diagram 1 below) at AmicusHorizon with its Residents’ Council, which had been a bold step change for an organisation that had not always embraced resident engagement or been known for its customer care. 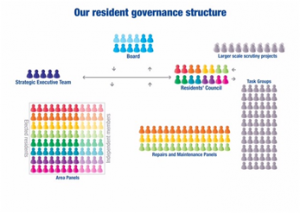